The settlement puts an end to a probe known as ‘Cum-Ex’ deals. The Frankfurt-based prosecutors identified the troubled bank as one of the parties facilitating the controversial tax schemes.

While Deutsche Bank denies its involvement as being the intermediary of the tax deals, it recognizes its role in the activities of some of its clients. The charge against the bank relates to deals done by individuals investigated in the probe, which the bank acted as a custodian for.

Bloomberg reveals that a payment of €540,000 (£486,000) was made to the prosecutor’s office. This resulted in the cases against three of the six individual suspects being dropped. The agency currently handles eight cum-ex probes. The €4 million fine ends parts of the cum-ex investigation which relates to raids made in September 2015.

The so-called ‘Cum-Ex’ deals were based on complex tax schemes that allowed owners of shares to claim refunds, more than once, for tax paid on dividends payouts – thus effectively syphoning off taxpayers’ money into investors’ pockets.

Profitable companies, that decided to reward investors who owned their shares, did so by paying a sum of money out of their profits (or reserves) at the end of their financial year. This payment is called the dividends.

Upon receiving their payments, investors are charged a dividend tax at source. In Germany, it’s currently at 25%. However, foreign investors can request a refund from the tax authorities.

Around the dividends payment day, shares of large companies were sold and bought back via a network of banks, stock traders and lawyers. The shares changed hands so quickly that the tax authorities were unable to identify who the true owners were.

Working together, investors then claimed multiple refunds for tax paid on the dividends and pocketing the profits amongst themselves, while the treasury footed the bill.

The man behind this scheme is allegedly former government tax expert, Hanno Berger, who jumped ship to become one of Germany’s most profitable tax attorneys. His clients included Adidas, Karstadt and the family that owns BMW.

It took a cross-border investigation of 38 reporters, 19 media over 12 countries, digging 180,000 pages of documents to expose possibly one the biggest tax robbery in European history.

The European Parliament acknowledges the estimates that the fraud have cost Germany around €25 billion, France €17 billion, Italy €4.5 billion, Denmark €1.7 billion and Belgium €201 million.

During a plenary session held on the 29 November, European Union MEPs called for an inquiry, rule changes and stronger tax authorities to avoid a repeat of the cum-ex tax fraud scandal, which cost member states more than €55 billion.

MEPs have called on the EU’s European Securities and Markets Authority (ESMA) and the European Banking Authority (EBA) to conduct an inquiry into the schemes that defrauded member’s tax authorities.

The financial regulatory agencies need to assess the potential threats to the overall EU financial markets and establish the participants involved. In addition, they need to evaluate if national or EU laws were breached. The agencies should also examine whether national supervisors took actions against the wrongdoers.

In spite of recently adopting the sixth update of the Directive on Administration Cooperation – DAC6, MEPs urge for additional changes to the Directive that also oblige the disclosure of schemes established for dividend arbitrage.

MEPs also call on the Commission to propose a European framework for cross-border tax investigations, the setting up of an EU Financial Intelligence Unit, and an early warning mechanism.

Only then EU tax administrators can successfully deal with any new aggressive cross-border tax schemes.

For the time being, Deutsche Bank is let off the hook with this settlement. However the company is still battling further pending investigations. 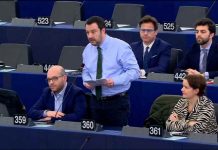