China leads and dominates the global insurance ranking in a recently published Kantar Millward Brown’s 2018 Brandz report.  The Brandz™ report tracks the value of the world’s most valuable brands and ranks them into a range of categories.

This year, the report shows that Ping An, China Life and AIA Insurance grabbed the top spots on the list with a combined total brand value of $57.70 billion (£44 billion), following an average record of 33% growth – besides, accounting for almost 58% of the value of all ten firms listed.

This dominance underlines the surge in China’s insurance industry in both growth and market size.

The Brandz™ report draws research from “over 3.6 million consumer interviews and more than 120,000 different brands in over 50 markets” making it a comprehensive survey of a business’s economic strength and the resonance of the brand in the eyes of consumers. While including consumer perception of a brand arguably adds a degree of subjectivity to the ranking, the basis in hard market values ensures that the Brandz™ rankings combine style and substance.

Ping An not only topped the list of insurers, but the firm has also climbed in the overall Brandz™ ranking to break into the top 50 brands at number 43.

This rise illustrates the dominance of China in the global insurance market driven by a growing middle class and rising GDP.  In addition to the top three Chinese-based firms, the ranking includes few US companies such as State Farm, Geico, and Progressive representing 22% market share of all the ten insurers. European insurers represented by German Allianz, French AXA and UK Prudential are very close behind their American counterparts with a 20% market share.

Again, these numbers reflect the overall state of the global insurance industry where emerging markets, particularly in the China-led Asian region, are growing significantly faster than older, more mature markets in Europe and the USA.  This growth seems to closely track GDP growth where China with almost 7% GDP growth significantly outpaces the US and Eurozone, both tied at around 2%.

In addition to the benefits of projected steady GDP growth, China’s financial sector may be about to experience another surge.

As a counterpoint to US trade restrictions against China, Beijing is considering further relaxation of controls on foreign companies’ operations in the $42 trillion Chinese financial sector.  This opportunity may pose a challenge for American firms but will be a welcome chance for expansion for European companies looking to escape sluggish growth at home.

However, despite the promise of riches that China offers, the market is not without significant risk.

Not all plain sailing

First, fraud and corruption remain a major concern.  Despite the Chinese government’s moves to reign in corruption, it seems to be struggling to keep up.  In addition to trying to purge the system of bad actors, the government also had to pump much-needed cash into firms that have suffered losses. This places a strain on both public funds and investors’ confidence.

Nevertheless, the prosecution of Anbang’s Chairman suggests a genuine attempt to tighten up on fraud and the Chinese regulator is also showing a proactive stance.  For example, in a recent report Swiss Re noted that when it comes to the government’s attitude towards InsurTech, despite a “generally supportive regulatory environment”, the Chinese regulator is “becoming more cautious about the potential risks posed by InsurTech, and is believed to be drafting rules to tighten monitoring of internet lending, payments and insurance”.

Secondly, shadow banking still remains a concern.  With an off-the-books banking system estimated at around 30% of the size of the formal market, regulators are concerned about the potential for this informal system to disrupt the whole financial sector.

A decade after America’s financial meltdown, largely in part to worthless paper underpinning large parts of the financial sector, the dangers posed by informal and unsecured investments are not lost on Beijing. Nevertheless, this potential for instability should be part of anyone’s calculation when considering the Chinese market.

Finally, the question of how long China’s market can continue to grow remains unknown.  As US and European firms know, there is a saturation point beyond which it becomes increasingly difficult to grow.

New forms of business, such as the gig-economy, present opportunities to reach new customers as do ‘pay-as-you-go’ InsurTech products.  But the core of insurance remains rooted in the traditional offerings of personal life and property insurance and commercial policies.

Similar to how growth for European and US firms is slowing as opportunities tighten, Chinese operators may follow suit over time, particularly if wealth remains largely concentrated in affluent urban areas. Nevertheless, exactly when this growth will slow is unknown and this is the key question that all China-watchers are asking themselves.

Europe and US eye East

Despite China’s rise, European and US firms are far from done for and continue to look for new ways to reach customers.  Companies are increasingly trying to differentiate themselves from the competition with clever, catchy ads or innovative products.  Meanwhile, InsurTech firms are offering consumers completely new ways to buy insurance. 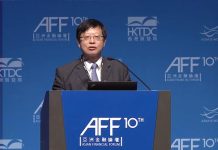