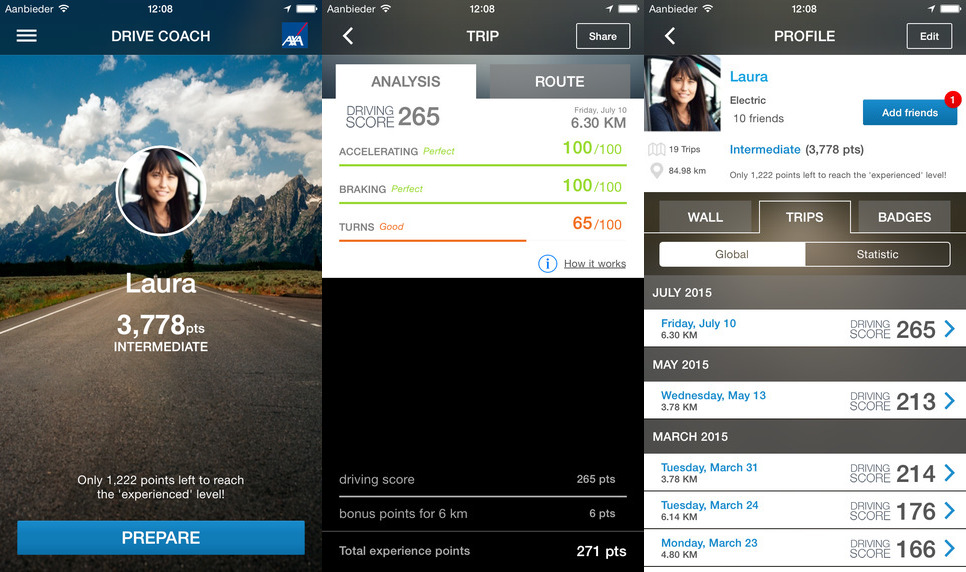 It didn’t take long for the global insurer AXA to develop its Drive Coach mobile application onto the new Apple Watch. Just a couple of weeks after the release of the long-awaited Apple’s smart watch, AXA teamed up with technology partners to release an innovative tool to promote road safety.

Surely this will go against all the efforts the government is trying to address the dangers of distracted driving. Indeed, because now you will be encouraged to be connected to a device while behind the wheel. AXA assured that the Drive Coach app will be working in tandem on the Apple Watch and the iPhone to deliver a simple and efficient experience without disturbing the driver.

With this new app people now don’t view AXA as a traditional insurer any more but as a provider of cutting-edge technology. For the Insurer the benefits will come from the huge and valuable amount of data on users coming from the application. Though, to reassure worried users AXA will not be using the collected data for any commercial purpose since the data will be anonymised.

How does it work

Drivers need to download the app onto their iPhone and connect it to the watch. Then just before starting, the driver activates the application. During the trip, the application analyses the driver’s acceleration, braking and cornering. And at the end of the journey, the application evaluates the quality of driving by providing driving scores.

The application also provides tips on improving the way of driving. Since the app is connected to the Internet the driver will have options to share his or her scores with friends or on social media.

The application has been downloaded more than 700,000 times according to AXA and it is getting mixed reviews. There are a number of people for whom the application keeps on crashing and eating a big chunk of their Internet data. On the other hand, satisfied users highlighted the application ease-of-use as well as making them more conscious of their driving behaviours.

After succeeding with its mobile banking application called Soon during which AXA had to rely on reinforcements from the start-up community with companies like Fiduceo, Tapptic and MongoDB  to complete the project. AXA teamed up again with the Big Data solution provider MongoDB to help handle the sheer volume of data the Drive Coach will be producing.

Big Data means new opportunities for insurers to create business value and extract it. In an interview with Computing, Kevin Murray the COO at AXA UK said “the increasing amount of data that AXA has at its disposal needs to be better organised if the company is to squeeze as much value as possible from it”.

It’s not the first time an insurer is at the forefront of the technology innovation. Other insurance companies like Allstate and Humana Group Inc. had a go at developing their own apps on the Apple iWatch.

Allstate provides an app called GoodRide that helps motorcycle owners to keep track of their rides information.  The app, which works in a similar way to the AXA’s Drive Coach, allows users to track miles, routes, and maintenance items, and also share it on social networks.

Pay as how you drive

Although AXA said that the data will not be used to discriminate between drivers but simply to help them improve their driving habits (or validating them). The Drive Coach on iWatch is one of the many applications that are currently proliferating and which will lead the Insurance companies to measure how well vehicles are driven. Then the premiums will most likely be based on how safe and conscientious a driver is instead of paying for insurance based on the average driver.

There are already a number of applications that offer life coaching, kitchen coaching, career coaching … this new AXA app is the driving coach (instructor) which acts as a supporting tool that will help drivers enhance their driving skills by recognising good performance and rewarding it accordingly. However, a common believe is that in order to improve their driving skills, drivers should concentrate on the road instead of playing with their new in-car gadgets.

If AXA can persuade drivers that the app is an investment that helps save lives, reduce costs and increase efficiency then it will be in the right direction … whilst we wait for the driverless revolution that is coming soon